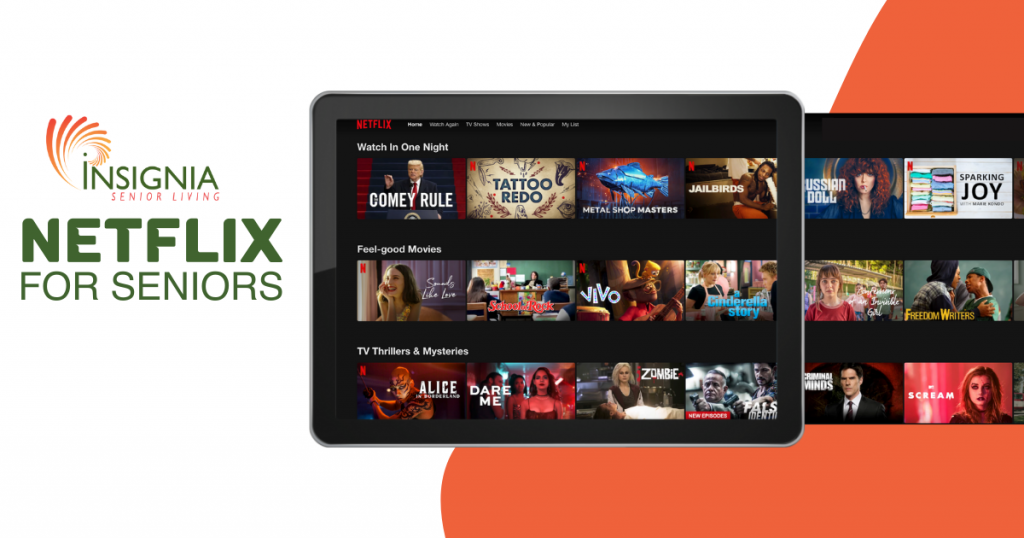 This is Why the Senior in Your Life Should Have Netflix

It‘s the Era of Netflix and we’re just living in it. Netflix for seniors? Yes, here’s why your elderly loved one should have Netflix! Let’s face it, the traditional senior tv that we all know isn’t exactly prime entertainment. Our seniors deserve better entertainment choices. Everyone love’s good entertainment accompanied by a comfy couch. For those of you who don’t know, Netflix is a media-services provider, that streams countless shows and movies. For many, it is a life-altering platform, inducing daily life with a sprinkle of amusement and enjoyment. It’s appropriate for people of all age groups, with adult shows, teenage shows, and also content for children.

However, when it comes to senior tv, they are often relegated to local channels. They can become overwhelmed by news or let down by less than stellar entertainment. This is where Netflix really shines. The user interface is extremely easy to use. Even the less techy seniors in your life can launch it, search for the content they want, and enjoy a leisurely activity.

A Lot of Time in Seniors hands

Seniors usually have a lot of time in their hands. Other than exercising, eating, and having an appropriate resting pattern. Keeping seniors occupied with something during the day is sometimes challenging, but it doesn’t have to be! Watching a movie, a show, or a documentary is a great option to help pass the day with enjoyment. Also, a show can give the person something to look forward to watching the next day.

There are diverse options to choose from! Different categories, depend on the mood, and on the taste of the individual. Comedies and Drama—adding joy or a giggle to their day, and known to be very entertaining; Game shows/ Trivia—challenging the mind and body. A very popular choice among this age group is Documentaries—for those who love informative content. Moreover, some reality shows offer a few eye-catching situations sprinkled in with some drama; which leads us to famous Telenovelas! There are so many choices! The best part is that Netflix will learn from your choices. They’ll tailor recommendations based on your senior’s selections. So, they’ll keep discovering amazing content that they’ll love, keeping them entertained and engaged. We’ve done our research on some shows, movies, and documentaries that seniors love.

Check out these shows for the best movies, shows, and documentaries on Netflix for seniors.

The best Comedies & Dramas for seniors: (with series descriptions)

Game shows can be a wildly entertaining part of senior tv time.

Telenovela recommendations on our Netflix for Seniors list: (with descriptions)

It’s important to state that senior tv screen time should be limited for the sake of their sleeping patterns according to Erica Odiot, Phsychogerontologist. Also, although the hours can fly by while watching shows or movies, seniors should keep exercising regularly! Hitting pause on Senior tv and taking an afternoon walk is greatly beneficial. One great recommendation is that you take into account the cognitive and physical condition of your senior. This way you’ll have a better understanding of the type of content that they can watch. Moreover, you can gauge how much time they can spend enjoying their favorite shows and movies. We hope this article helped you figure out what the next generation of Senior TV looks like. Now seniors can have a good laugh, a cry, or simply reminisce while enjoying great content!

Having a balanced TV time is crucial for seniors. Our Connectivity Program encourages tv time while offering unique alternatives for entertainment. Feel free to contact us for more information about this and other programs. Ready, set, netflix.com! Do you want more ideas for senior entertainment? Discover our programs here!

"Netflix has some great options for seniors."